Yesterday I decided to try a new spot for lunch.  You might think that would be a tough task in such a small town.  San Pedro’s population is under 30,000.  But there is a new bar or restaurant springing up constantly.  CONSTANTLY.And, the scuttlebutt around town is that Geo’s Hideaway Cafe and Meat Market (interesting combo, right?) not only sells a mean Angus steak but also makes great coffee drinks and paninis.  (Angus steak is relatively new to Belize.  Hump-backed Brahman cows are made for tropical climates but let’s just say that their meat is a bit…tough.)

Geo’s has been open since April.  Time to check it out.

This, as you can imagine, is Geo.  He has lived on the island for quite a few years and worked at Searious Adventures (that’s where I first met him), for a para sailing company, he opened a Butterfly Farm by the Belize Yacht Club and now he has opened this bar and restaurant.  He even worked at Chaa Creek for years before he moved to San Pedro.  Lots of good experience. 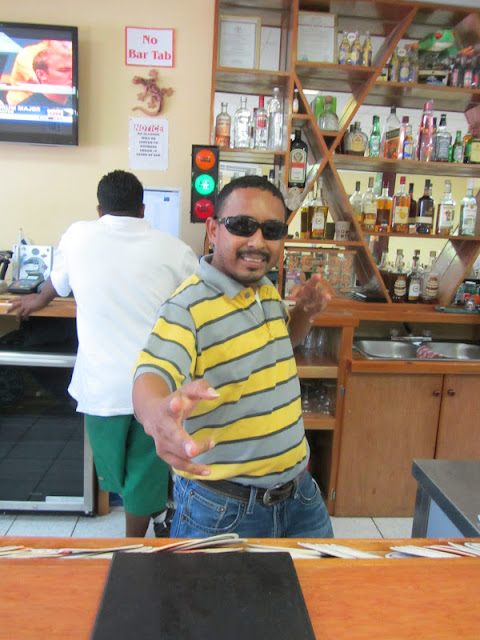 And here is the entrance.  They are right across from the San Pedro Police Station just north of town proper. 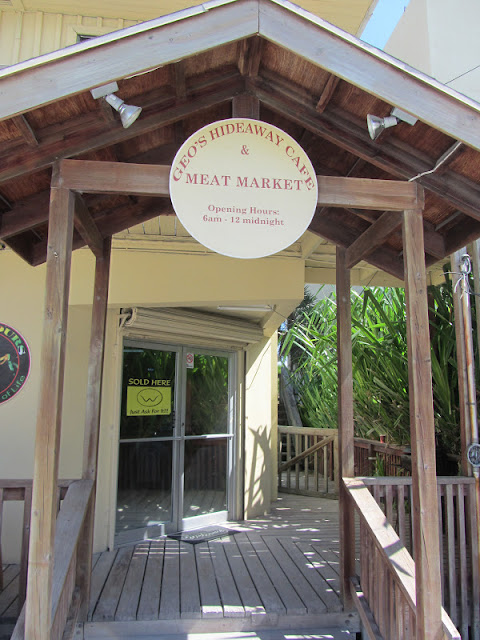 In the back of the large space is the meat market.  Quite an extensive list of products.  I’ll admit…I don’t even know what a few are.  Picana?  Butt bacon? 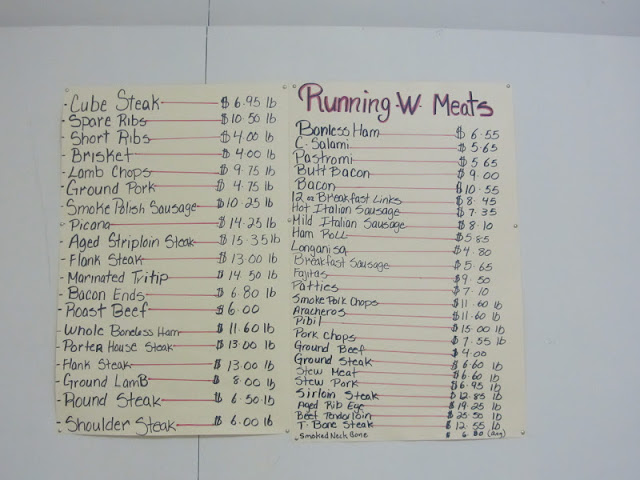 All the meat is from Running-W (who also run what is supposed to be an amazing steak house in the Cayo District of Belize).  I am a big fan of this brand.  The bacon?  The best I’ve ever had.  At the Belmopan Agriculture Fair last spring, I was parked by their booth of grilling meats for at least 2 hours. 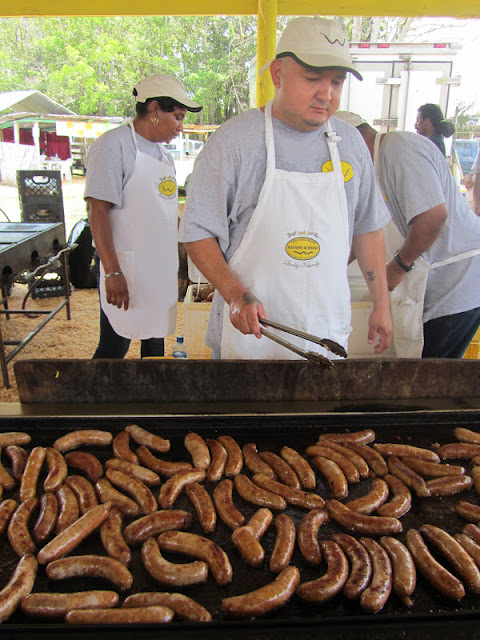 Okay…back to Geo’s.  The space is large, beautifully A/Ced (it’s HOT right now) and clean.  With Wi-Fi, it’s the perfect place to use as an office for the day while enjoying good food and a few frappuccinos. 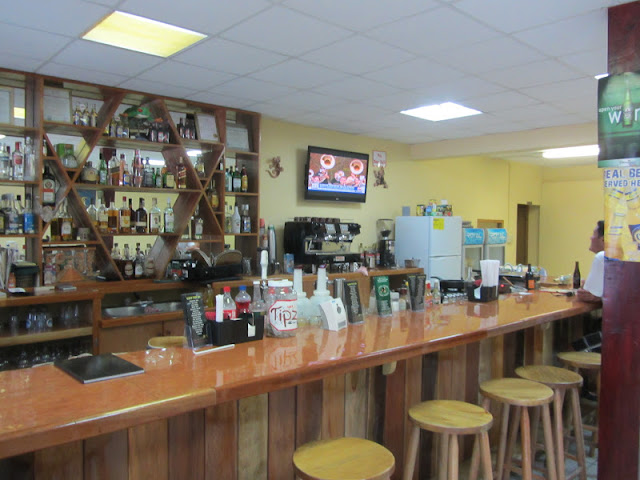 My roast beef panini was very tasty.  And is part of my research for 2012’s Best Food & Restaurants in San Pedro post.  So far I’ve had the paninis at Sail Away, Crazy Canuck’s and Geo’s.  Does anyone know where I can eat more?  I so love a pressed sandwich. 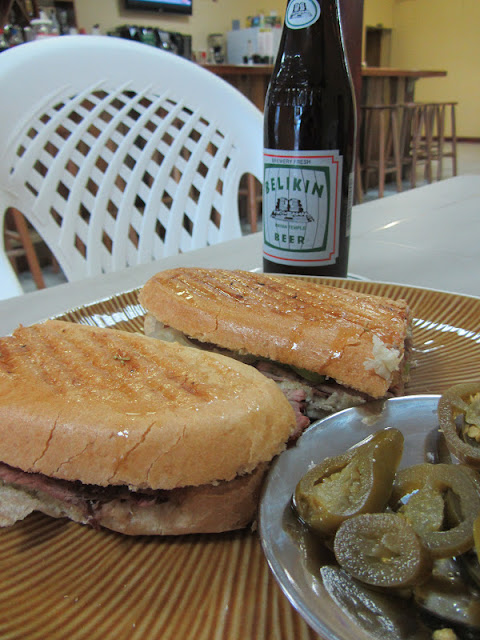 They have a gorgeous coffee machine. 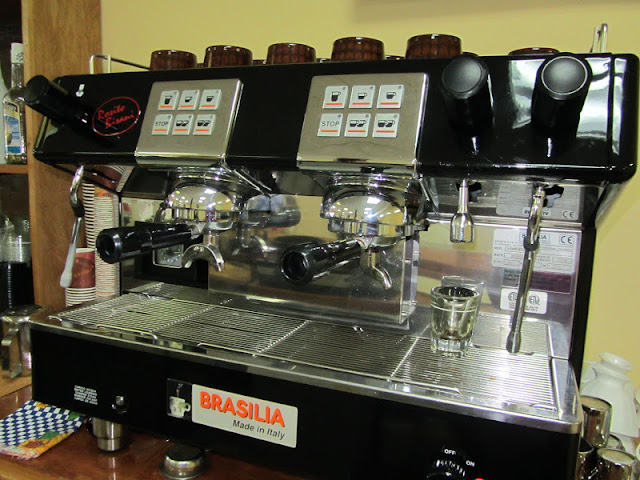 Geo is as friendly and as helpful as usual and it’s a very comfortable spot. I didn’t buy a steak since I would have no idea what to do with it but would love some feedback if you do!  Check out Geo’s.  Saturdays might be the perfect day.  They do a pork pibil plate…one full pound of the shredded slow roasted pork, one pound of corn tortillas and pico de gallo for $20bzd.  It could feed a family.  And word on the street is that it’s divine.

Next…into town.  The block by Elvi’s Kitchen was closed while they were doing electrical work on the new Seven Sisters condo complex and mini-mall. 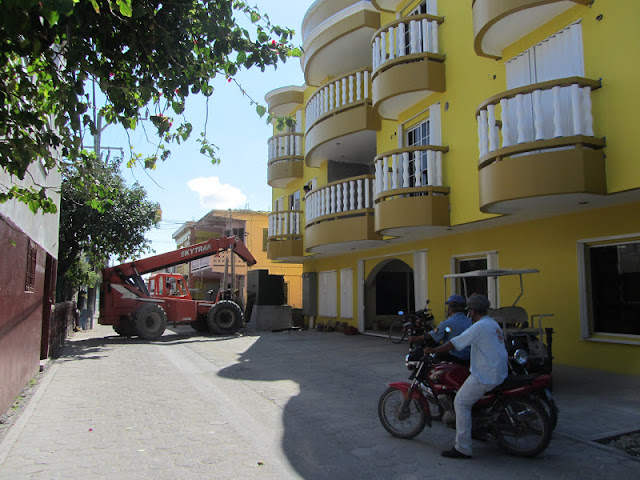 The first business has moved into the ground floor, the San Pedro Post Office.  The space is definitely bigger, they are supposed to get more PO boxes and they definitely need a bit more time to get it fully together.  The poor guys were wading around through the piles on the floor. 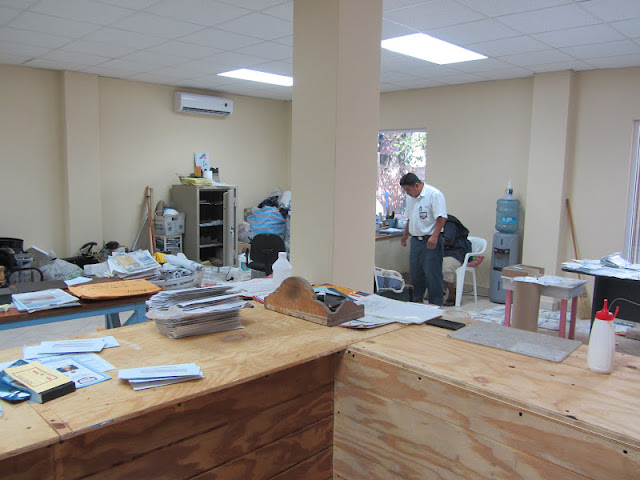 We then stopped by Wild Mango’s to find out when they are opening and what new changes are happening. I need to make sure that everything is going according to schedule at my favorite lunch place.

They have expanded the deck a few feet for some more tables, shortened the bar and put in a cool new lounge area.  The perfect spot to eat my Amy’s Chef Salad and sit my caiprinha.  Perhaps set up an official San Pedro Scoop sub-office.  I’ll have to run that by them.  The official main office will continue to be my living room couch. 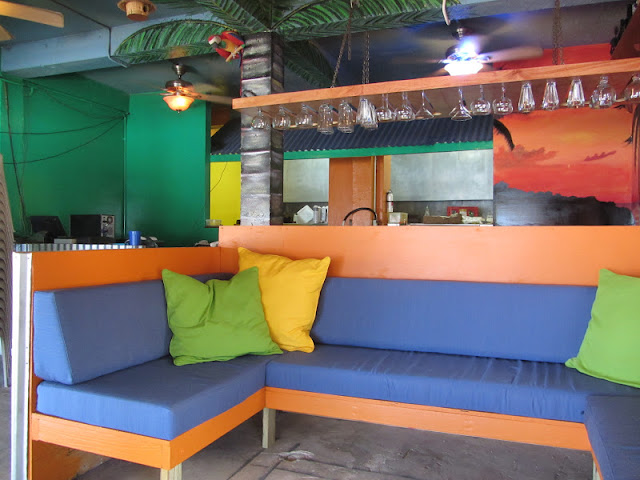 Mango’s plans to open at the end of next week.  Stay tuned to their facebook page for more information, pictures of the renovations and possible new menu items.

A quick walk down the beach and we found even more new businesses.  The first was at Daddy Rock’s Night Club… 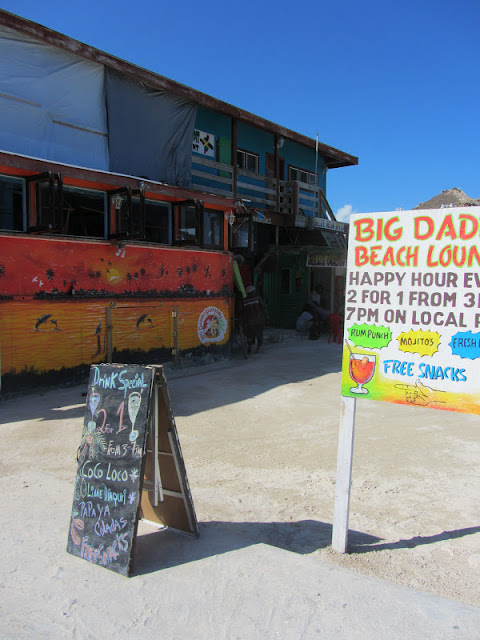 There are so many bars packed along this beach strip…the Big Daddy’s Beach Lounge (above), Fido’s, Cholo’s…it’s a really tough spot.  But the new Senor Marlin’s looks pretty good… 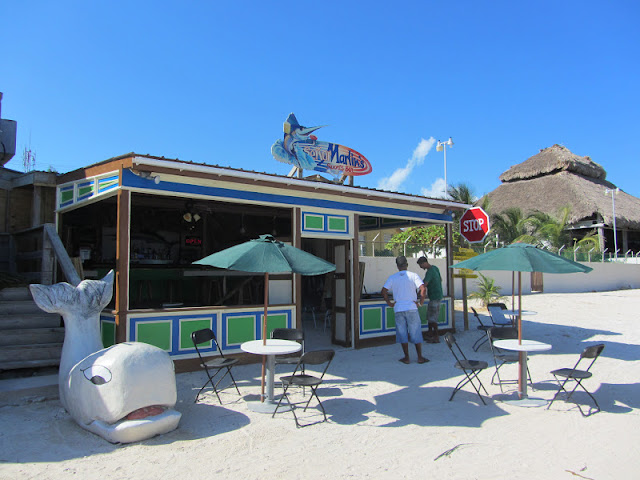 It really was a pretty day. 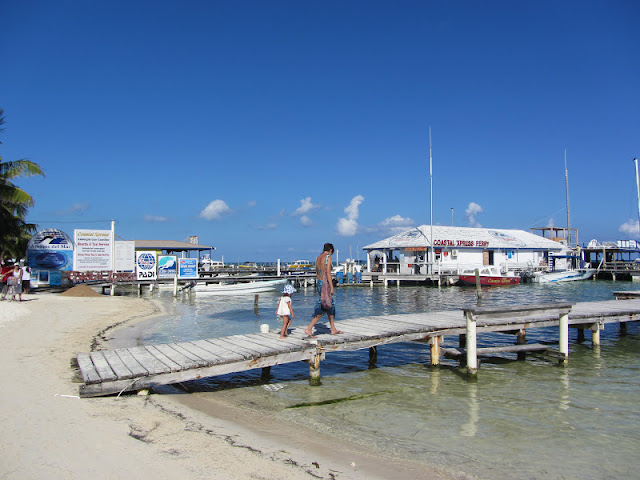 And lastly, the Mojito Bar at the Sunbreeze Suites (formerly Aquamarina Suites) has closed and the space has been taken over by the ever-moving Jambel’s Jerk. 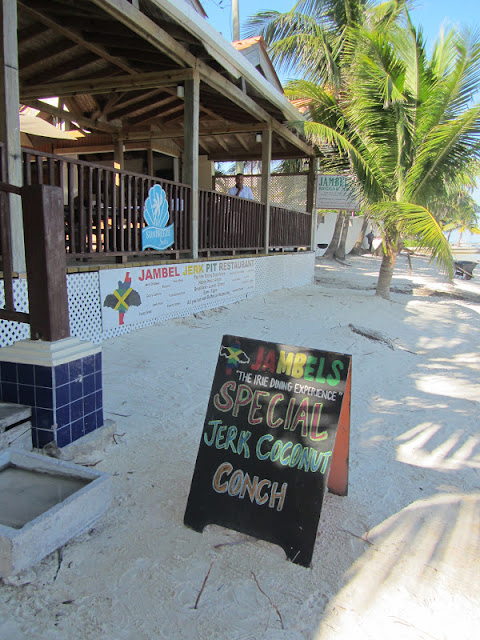 Since I’ve lived here, they have been at the Coral Beach Hotel (now Mestizo Bistro), across from Tropic Air, at Xaman-Ek resort and now on the beach.  I do LOVE their coconut curry shrimp and the conch special sounds just as good.

That’s it for a walkabout around San Pedro.  One note:  there are SO many more tourists around then last year.   Glad to see so many people taking advantage of some fantastic airfares to visit Belize.

If you are wondering what I was blogging about one year ago, I was making Pigtail and Split Peas!   And I haven’t made it since…

3 thoughts on “Around Town: Geo’s Hideaway, The Post Office, Wild Mango’s and More”