Tell people that you are flying to Medellin, Colombia and they tend to think the worst.  It’s not surprising. 25 years ago, Medellin was the murder capital of the world and the center of infamous Pablo Escobar’s multi-billion dollar cocaine trafficking empire.  Some say he was running the city and maybe even the entire country.Now… you would never know it.  Never.  This is a city packed with culture, insanely friendly people, greenery, flowers and more culture.  Ballet, opera,  jogging and biking paths, great public transit, nightly free movies, cultural centers, pedestrian walk ways, free wi-fi everywhere, beer and fruit vendors on every corner and so much public space.

Even the graffiti is beautiful to me. 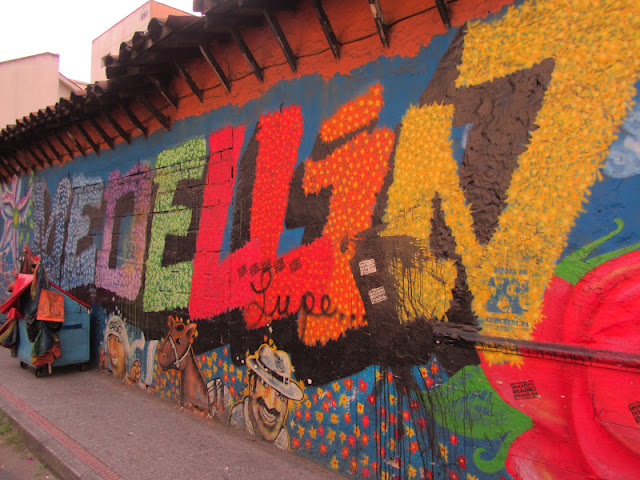 And I love the fruit…the strawberries are gorgeous. 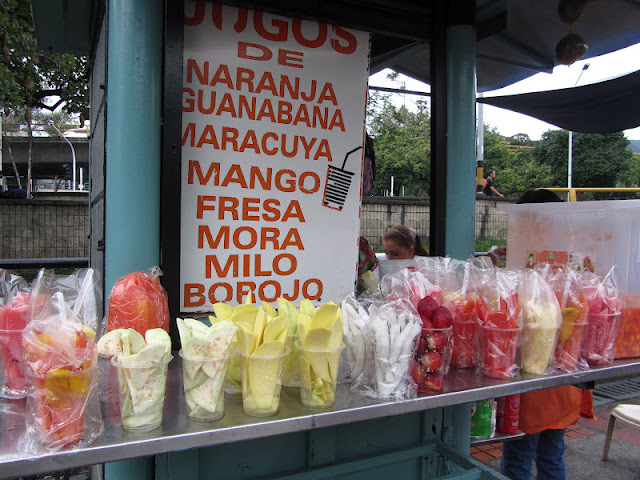 You hardly see one  thing about Pablo Escobar (sorry all of my friends in Belize who wanted a t-shirt with his face on it.)  Residents of Medellin don’t romanticize gangsters like we tend to (think Sopranos and Scar Face…you DEFINITELY know at least wanna-be gangster with a poster of Pacino’s famous role).

The memories are far too fresh in this city.  He was a seriously bad man.  And most would rather focus on the positive.  (Pablo, though, is still FASCINATING to me.  There are some interesting Escobar facts listed at the bottom of this post.)

This is the only sign of the Don I’ve seen…this one tour advertised in a hostel that caters mainly to foreigners. 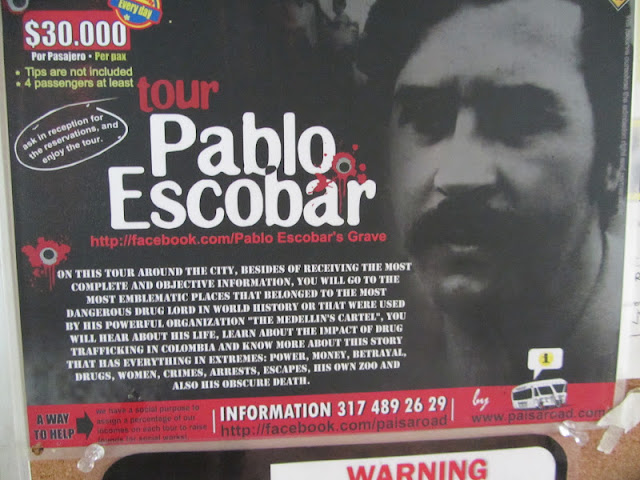 THERE IS SO MUCH POSITIVE TO FOCUS ON.  This city of 3 million tucked in an Andes valley that enjoys a year round spring is about to become a huge world tourism focus.  Yup, I’m calling it.

Yesterday morning I went on the Turibus tour of the city.  It leaves everyday at 9am and 1pm from Parque Poblado costs $18,000 pesos (or about $10USD), is given in English and Spanish and is totally touristy.  But I am a tourist, it is super cheap (to me) and a great way to get an overview of the city.  A perfect way, in fact, to figure out what you want to spend time on and what you want to skip.

Here’s my ticket and my back row seat. 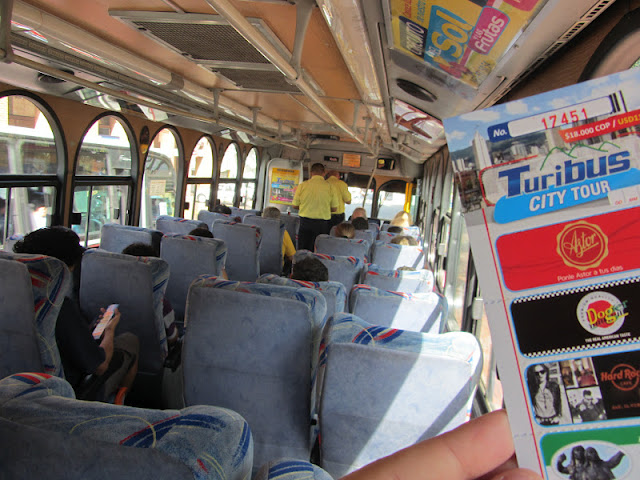 We started by going around the bus and saying where we were from.  Families from Mexico, from Argentina and from all around Colombia.  I was the only English speaker.  And Federico, the guide and Alex Rodriguez (ARod) look-alike (you’ll have to take my word for it), had no problem doing the tour in Spanish and English.

The only weird thing about the whole bus trip was that Latin American men are very uncomfortable with a single woman travelling alone. (Danni and Cesar were getting new shocks installed on their truck.)  I was constantly asked to join everyone else’s group.  When I exited the bus, 8 hands were extended to help me down the steps.  One time I accidentally dropped my sunglasses and everyone hit the floor to help me find them.  Super nice…but not necessary.

Let me show you some pictures from my Turibus Medellin tour.

Here is the Palace of Culture (closed since Telemundo was filming a Pablo Escobar documentary…that was not advertised.  I was told on the down low.) 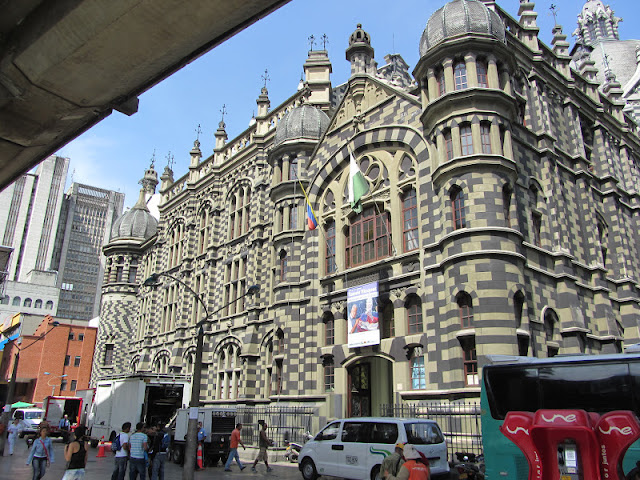 And right in front of it, the Plaza Botero showcasing 23 bronzes donated by Medellin’s most famous artist, Fernando Botero.  They really are stunning. 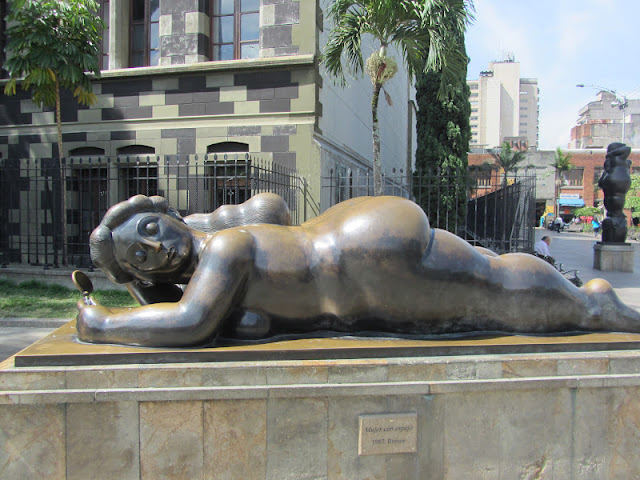 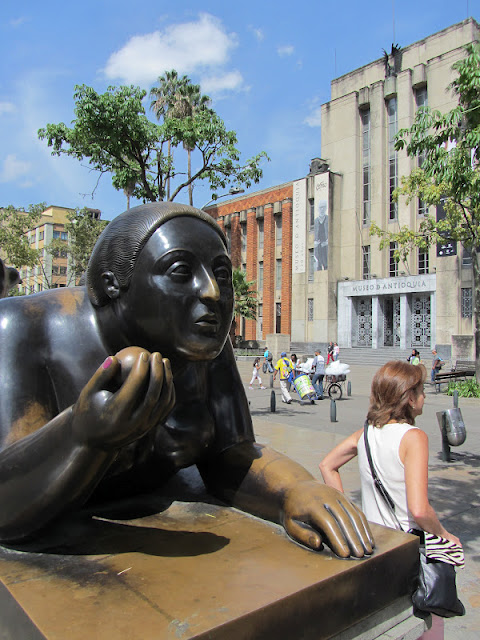 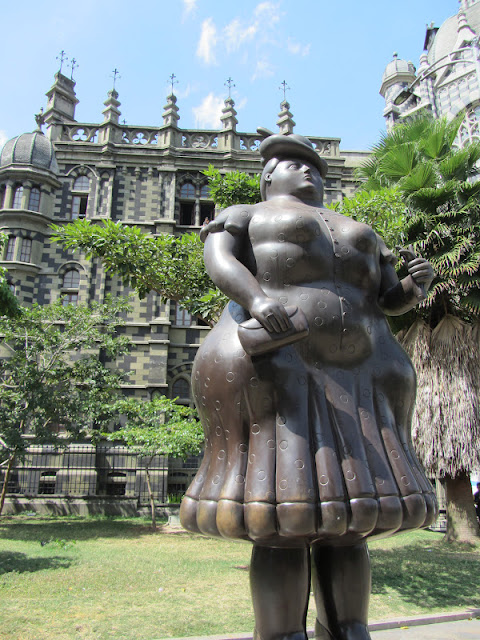 I’m not a huge fan of his paintings (anyone can paint Jesus or the Mona Lisa fat) but the sculptures are really beautiful.

The tour guide on my bus told me that you needed to touch the Roman gladiator’s penis to insure a life of love.  Fine!  I’ll do it. 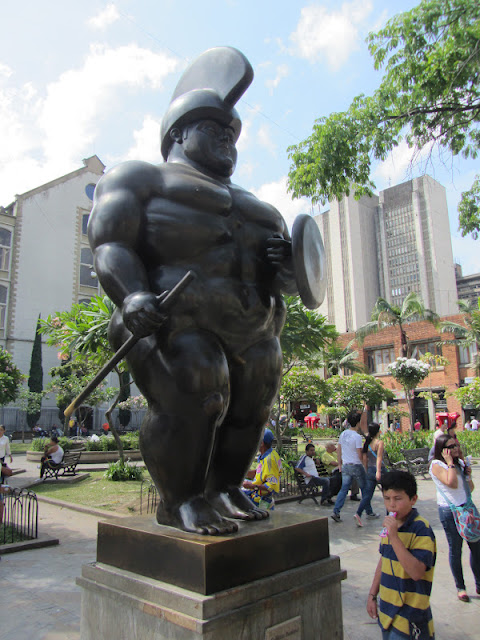 Strange that no one else was reaching up to rub it but it was well worn, that was apparent, and one simply cannot take that sort of risk with a loveless life. 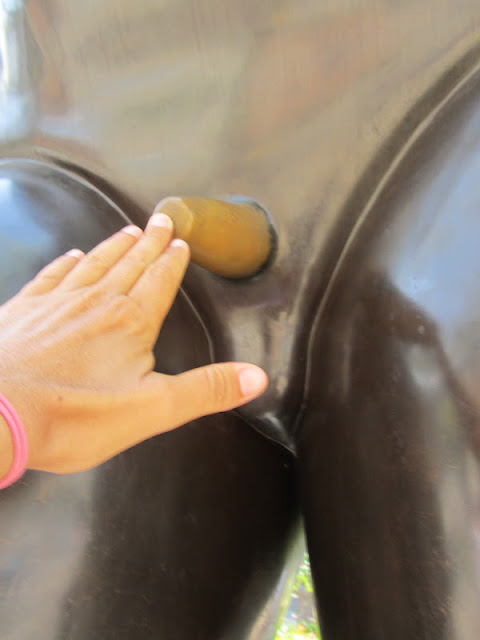 Huh.  I’m sure the size has some very deep artsy meaning.

We next headed over to Bolivar Parque, a gorgeous old park and pedestrian walkway with fountains and of course, lots of fruit, fruit juice and fruit smoothie salesmen.

There are so many that I’ve never seen or tasted before.   Like this one… 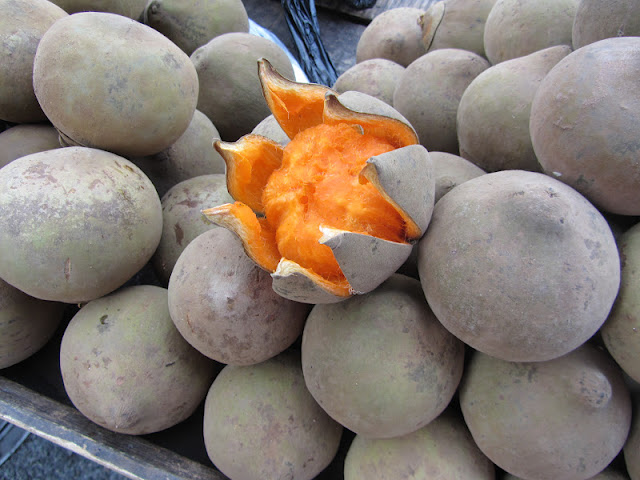 It almost looks like a baby coconut on the outside and is called sapote.  It is a bit stringy like a mango and not sweet enough for me. 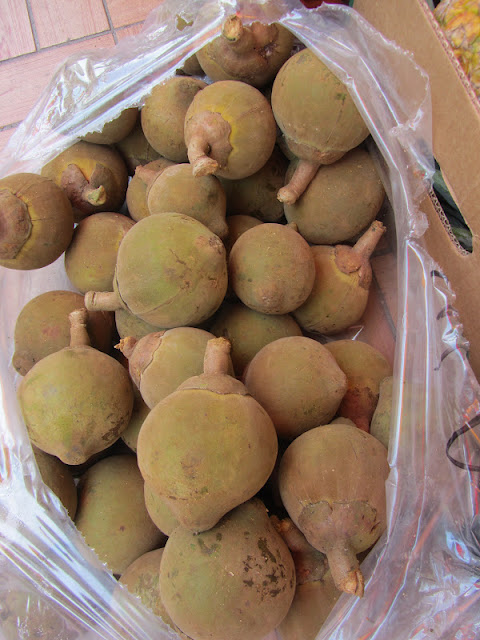 There is a gorgeous old church and fountain.  Apparently the largest brick cathedral in the world. 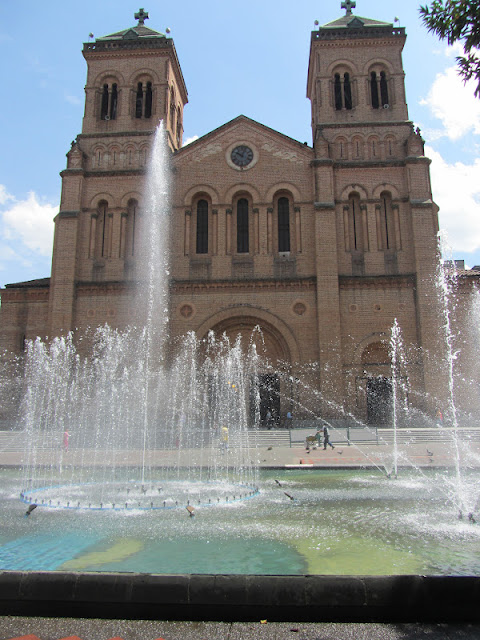 Let me hold off on more because, well, there is so much more.  We are driving 4-5 hours today to the Zona Cafetera region to check out the coffee plantations.  I’m starting to lag behind on my blogging already…

And for my own personal information, back to Pablo Escobar…

Though it is widely accepted that Escobar was shot by authorities, word-on-the-street here in Medellin seems to indicate that it was actually a suicide.  According to two guys I spoke to, Escobar would never have let himself be “taken by the Americans”.

Pablo had a gynecological chair installed in his home for…ummmm…recreational use.

Supposedly Escobar was a suspect in the first bombing of the World Trade Center.  (He didn’t die until December, 1993).

And to bring all of it together at the end, here is one of Botero’s paintings of Pablo Escobar. 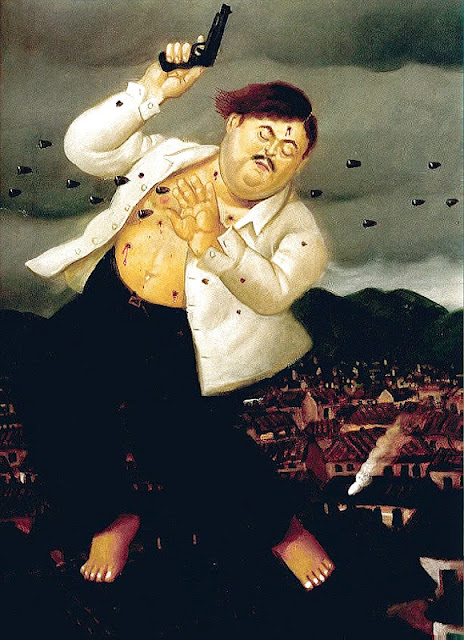 Borrowed from the site:  Bogotarocks.com.