Yesterday 440 San Pedro High School students gathered in the Angel Nunez Auditorium for a Youth Rally.  Four motivational speakers, 2 hours, lots of rowdy high schoolers restless with graduation so close…I didn’t know what to expect.   I arrived early to DJed blasting the music of Rihanna and Pitbull…I had a good feeling about this event. 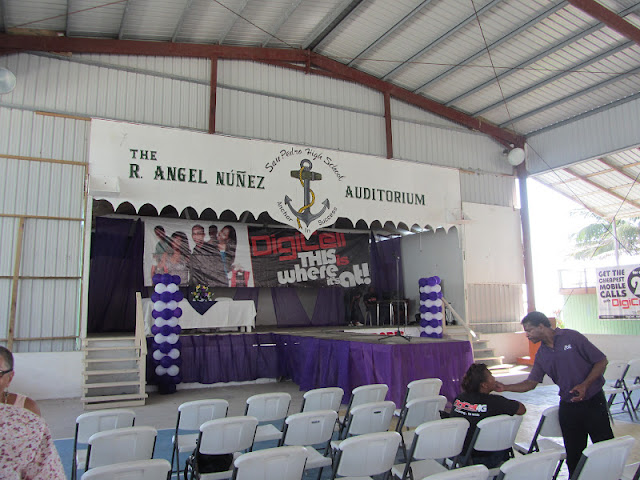 The students filed in.  All high schoolers in San Pedro wear white, almost nurse-like uniforms.  During the rainy season it is miraculous how clean they keep themselves.  The only differentiation between the classes is a green tie for the first year class, yellow for the second year, blue for third and red for the graduating seniors.  (I hope I got that right). 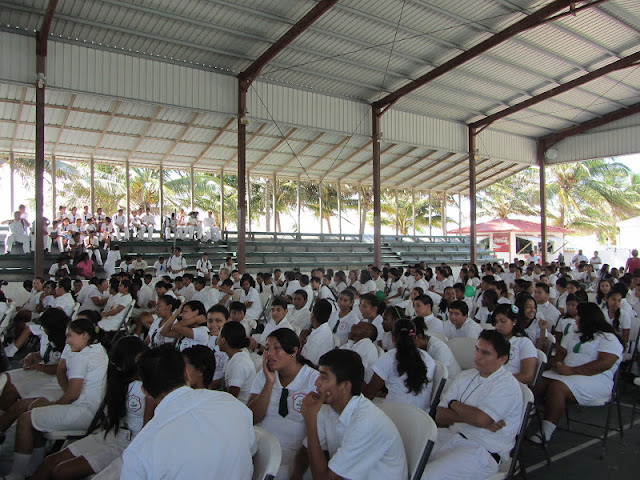 Minister Heredia arrived and took some pictures with the four speakers…all had flown in from the US for the event.  Immediately after their San Pedro gig, they flying Tropic Air over to speak to a huge student group in Belize City and then out to Cayo to meet with even more young people. 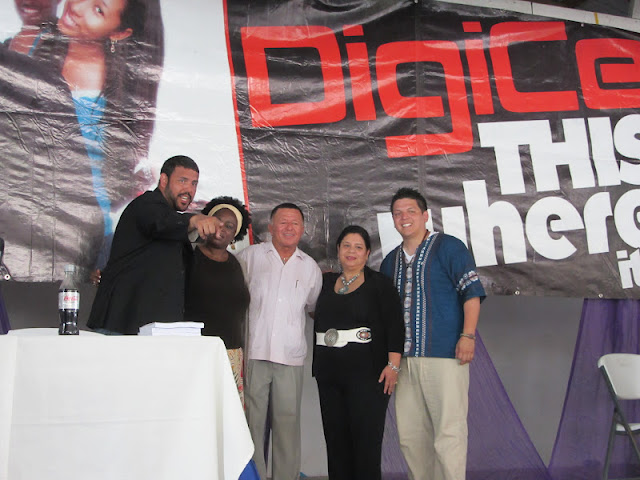 The event was for the high school students but these three younger kids were there to receive their awards from “Be Kind Belize”.  They were nominated by their primary schools for the Kindest Kid in San Pedro Award (ages 6 to 10).  Here are the winning Kindness Ambassadors. Kids who put others before themselves, who respect their teachers, their friends and the environment (though the competition is over, read the nominations, you’ll tear right up).   Seriously cute and so nervous to stand on stage in front of the high school and receive their prizes! 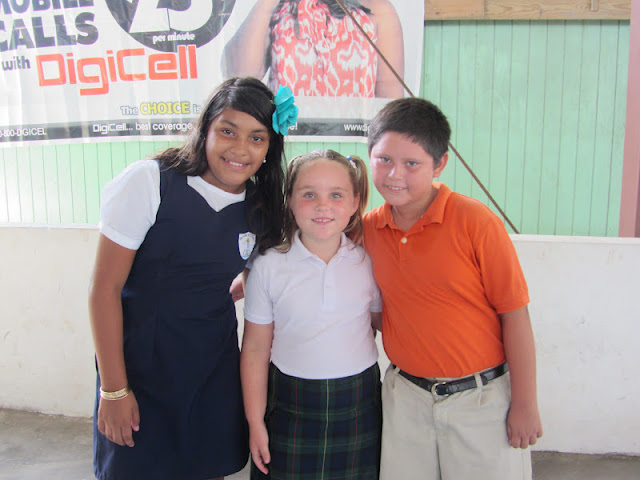 Minister Heredia presented them with some seriously packed gift bags.  Mariano Calderon (in orange from the Island Academy) was the grand prize winner.
The first speaker, Consuelo Kickbusch, a retired Lt. Colonel in the US army limped to the stage.  She whipped out her X-Ray to show the kids that she had recently been hurt but that she was here in Belize because they matter to her.  Her mix of Spanish, English and what she described as barrio slang, had all the kids hypnotized. 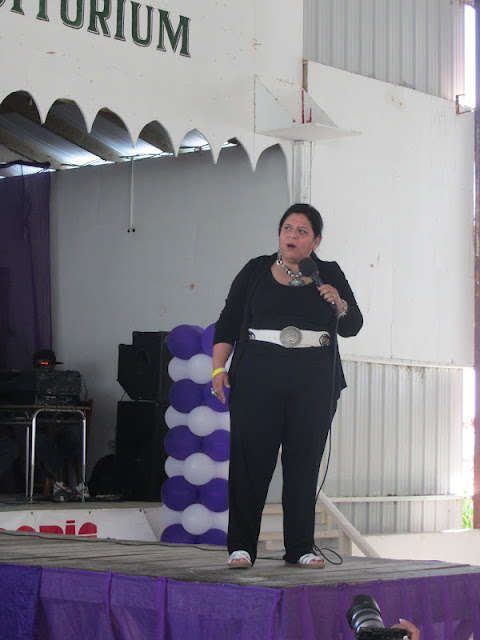 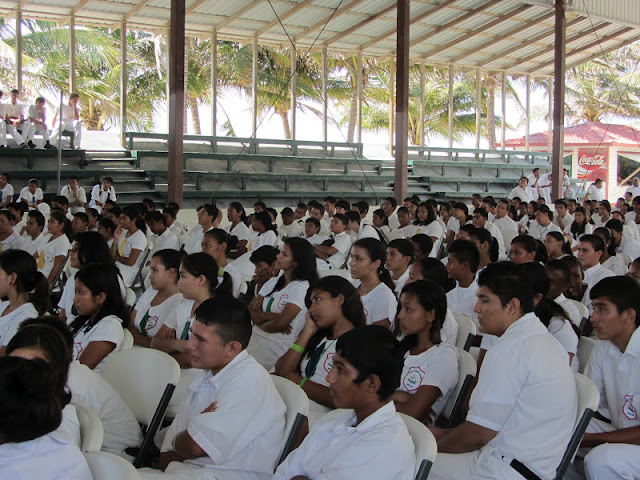 She told her story of being beaten for speaking her “father’s language” as a young child, of being beaten by her mother, of being sexually abused and thinking as a young girl that the only way to receive love was physically, about first learning to read at the age of 19.  And about how she finally rose above it all.  Heart breaking and incredibly inspiring.  At the end, she asked children to raise there hand if her words had changed their lives.  Three students came up on stage. 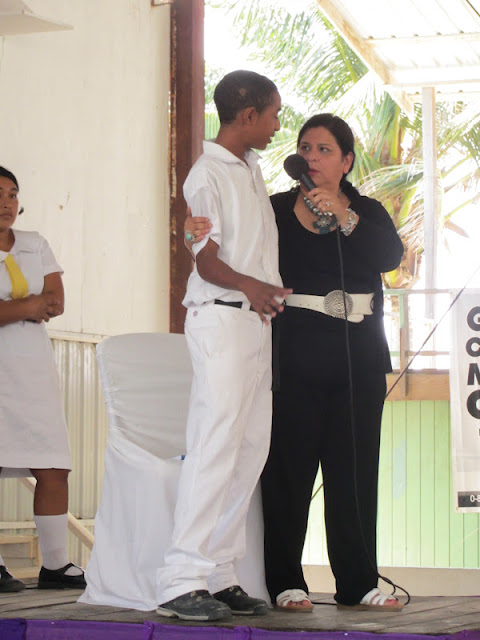 There was hugging and tears as the kids told briefly how they were touched by her life story.  She gave them a copy of her book, some spending money and even a piece of her personal jewelry, a silver ring.  “You are special” was the message again and again.   I don’t think there was a dry eye in the house.  And I have never heard a group of kids this size so quiet.
The kids led a stand ovation. 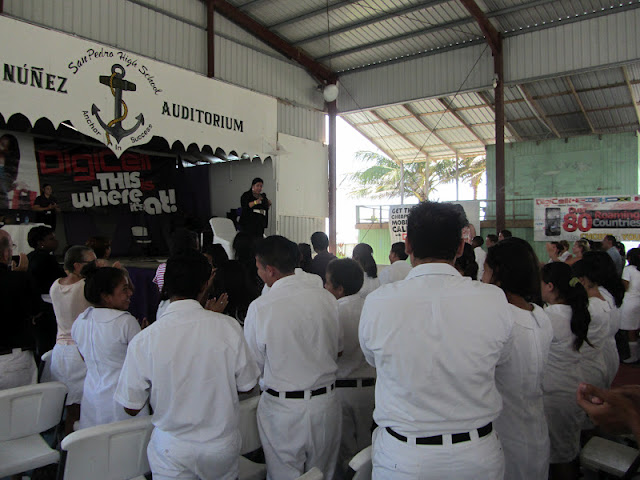 She was a very tough act to follow.  But Roy Juarez Jr spoke next about life as a homeless teenager abandoned by a mother who herself was on the run from an abusive ex-husband.  His message?  Education is the key.  No matter how hard it is…don’t allow others to take your dreams.  Be the change you want to see in others.
Pamela Perkins danced on stage to the delight of the kids.  Actually, in Belize seeing a teacher or any adult bumping and grinding is no big deal but it gained her some respect. 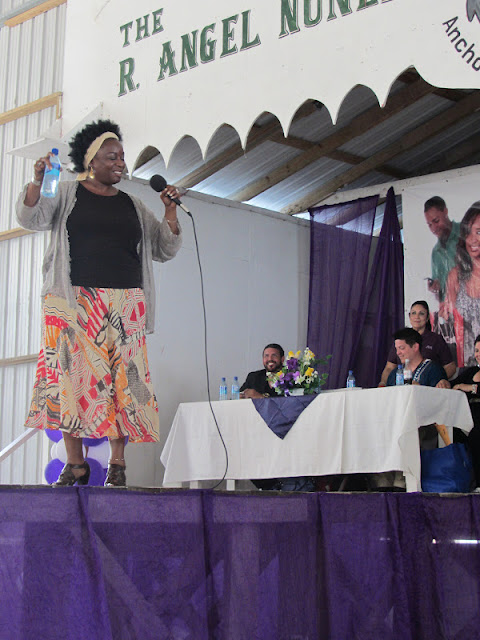 She spoke about growing up black and growing up as a woman when it wasn’t really that cool to be either.  She talked about positive thinking and positive words.  You are the words you say about yourself.  She had us telling our neighbors and shouting out “I WOW!”.  You are special, let yourself know it everyday.
Last presenter was Mr. Bert Oliva.  His mantra?  Live crazy.  Live life, don’t let life live you.  The kids seemed to embrace the idea of living crazy.  Mr. Oliva said that he was going to call an adult up on stage to do something really crazy to hammer home the point.  Someone came up on stage and whispered to him…”we can now take a student volunteer, it has been approved”.
You could feel the excitement in the room.  A few kids ran to the stage to participate.  These kids are brave.    One girl was chosen…chosen to swallow fire.   Her nerves definitely started to grow as Bert demonstrated.  He dipped the wand in some sort of kerosene and lit it.  (Her look says it all…) 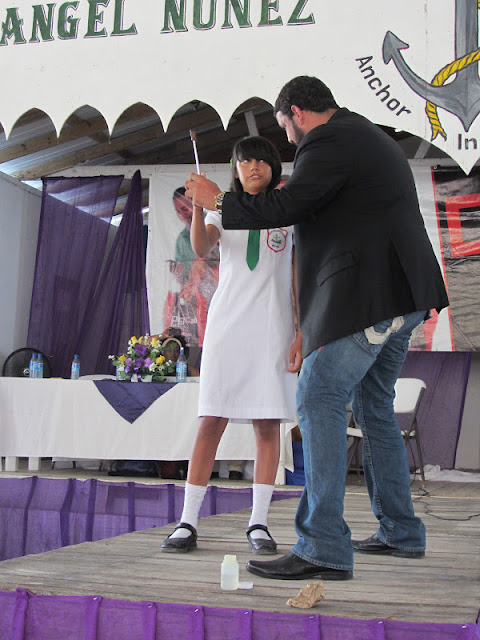 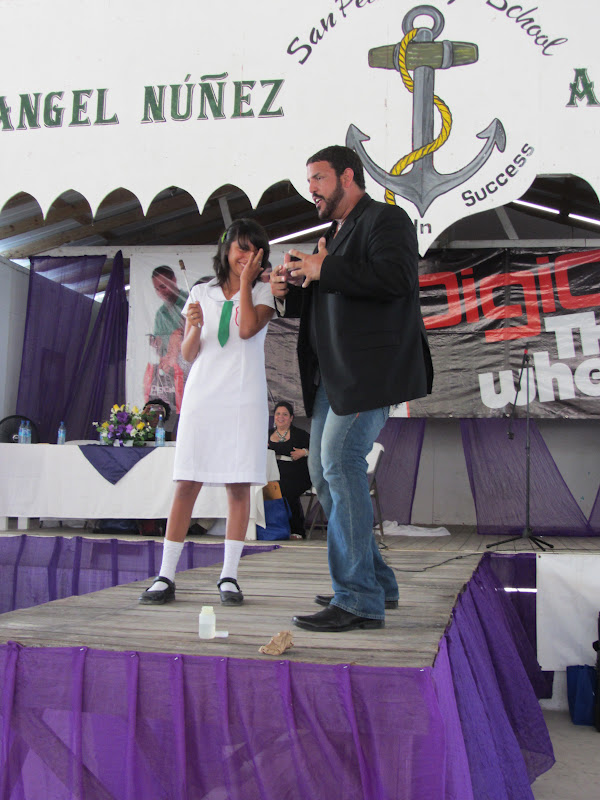 Even the Minister was transfixed. 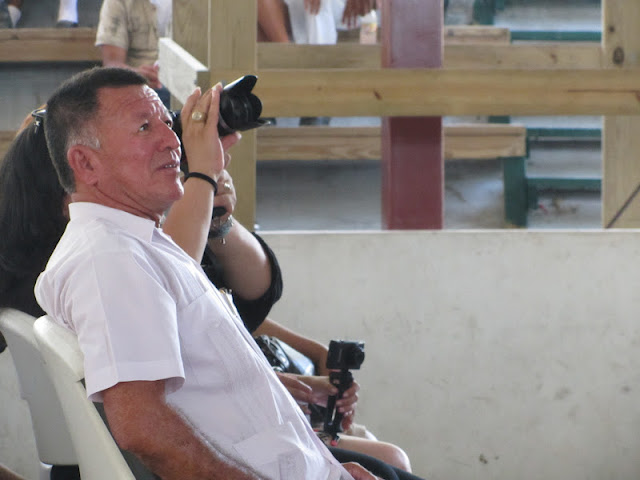 This was the real deal… 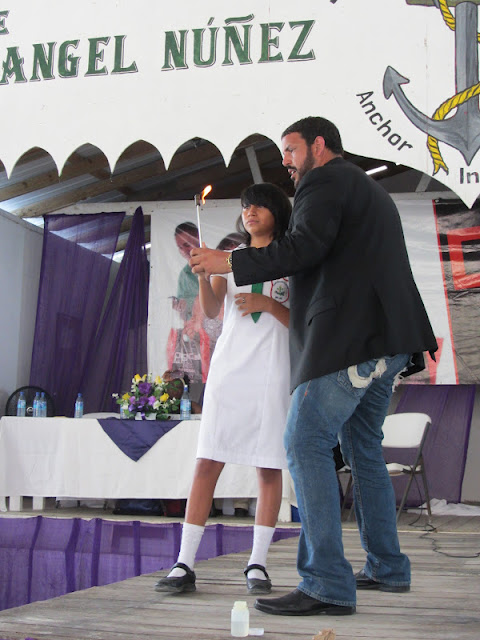 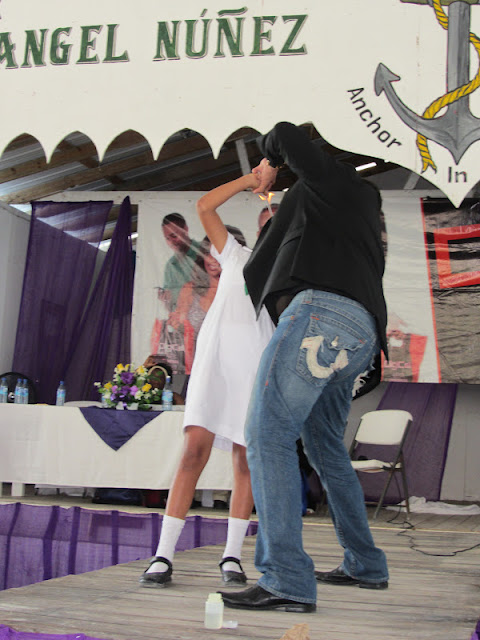 her eyes were tearing as the DJs played Nelly’s “Hot in Here”.  She said she was “so freaked out”.
The kids loved it.
Maureen Utsman helped organize this amazing event and there were sponsors galore…from BTL (our phone company) to the Belize Tourism Board to Tropic Air.  Maureen is going to kill me for putting this picture up but I think it’s a cute one.  And I like the t-shirt:  If I was a plane, I’D BE SUPERSONIC!  Great job Maureen! 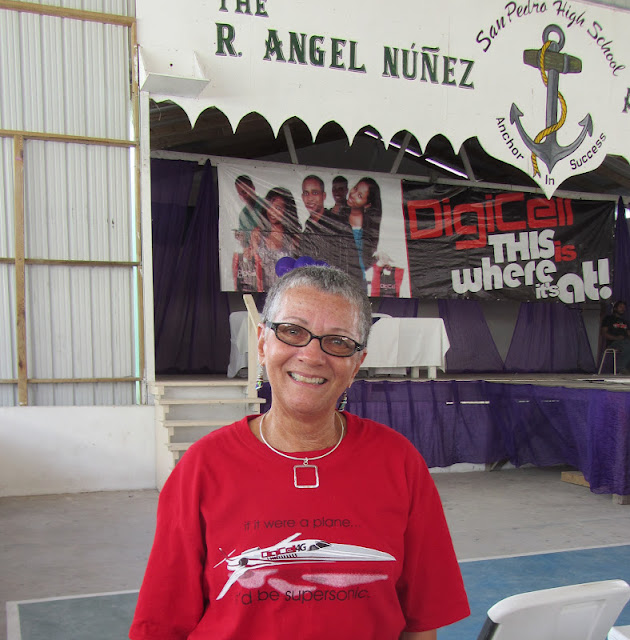 I am not embarrassed to tell you…I am not usually a “self help” person.  But each and every presentation and the kids’ reactions were very moving.  Very inspiring.  I was drinking the Kool-Aid.  Sure some of this stuff might be seen as cliche, but it is cliche for a reason.  This event was FANTASTIC.  Congratulations to everyone who was involved.