WARNING:  IF IT IS GOING TO DEVASTATE YOU TO SEE A PICTURE OF A BACHELORETTE BEFORE THE SHOW AIRS.  DO NOT READ THIS POST!
So…I got a tip a few days ago that “The Bachelor” TV show would be filming a special date in Caye Caulker.   The “Bachelor” has been filming in San Pedro, Belize for the past few days but Caulker was my chance.   I secretly love the show.  It’s a very guilty pleasure and when it is on, I watch it pretty religiously on Monday nights.  (FOR THE LOVE OF GOD, it’s 1000x better than “Dancing with the Stars”.)Caye Caulker is the perfect place to get my picture, the one I’ve been dreaming of.  It’s a tiny island off the coast of Belize and close to San Pedro.  It’s beautiful and VERY laid back.  If they were going to film on this island, there are not too many places to hide.  Scooparazzi was on the case.

Word on the Belize street is that the current Bachelor, Ben (who started with 25-30 girls) is down to 6 ladies.  Obviously this show does not air until he has proposed to one…they are in the middle of filming it now and it is QUITE a big deal.  Lots of money, huge crew, boats, helicopters and best of all, great publicity for our country.

As I was eating lunch, two boats from Ramon’s Village of San Pedro pulled up at the dock, 4 golf carts pulled up and the boats unloaded lots of camera equipment and crew members.

I pretended to talk to a tourist couple that was relaxing on the beach.  With my little crappy camera, the crew paid me no mind.  The little crappy camera was a good thing (I didn’t get in trouble until later in the day) but a bad thing…to be a true paparazzo, I’m going to need a better zoom. 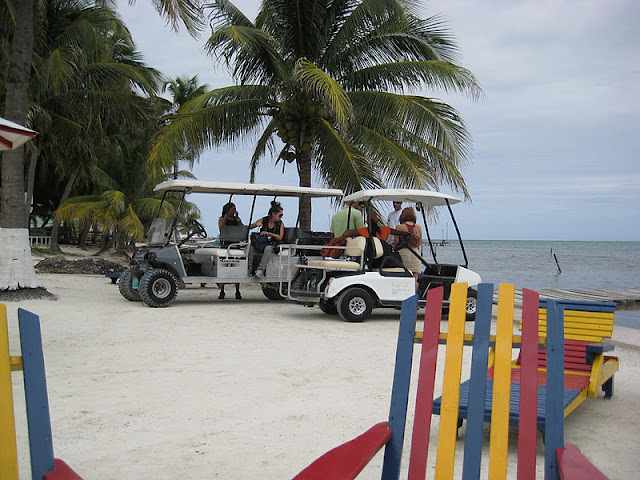 Ok…not so interesting.  But wait…there is more.  I knew that the Bachelor’s lady friend would be flying in to Caye Caulker so I took the 10 minute walk down to the airstrip.  I passed this cheery sign.  (We could use a few of these in San Pedro). 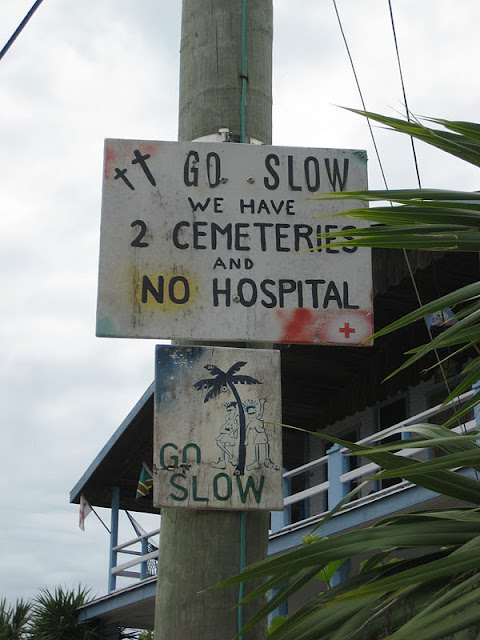 The whole crew was setting up at the air strip.  I tried to hide out at Tropic Air but the guys there wouldn’t have it.  They didn’t want to get in trouble and had all signed confidentiality agreements…so I went outside.  I was the only one there.  Belizeans really didn’t seem to give a crap about this whole “Bachelor” thing one bit.  Most thought it was some sort of boring documentary.  I tried to explain…but the mostly male group looked sorry for me…gave me that “poor crazy gringa” look.

The crews’ #1 priority seemed to be finding some lunch but there were other discussions.  The night time date they were planning at the Iguana Reef Hotel, the band that was being shipped in from Dangriga to add some cultural flair to the filming, the lobster hunt that the couple was going on this afternoon, getting mini-cams set up on the handle bars of the bikes…and then the call came in…CASSIE IS ON THE 1.30PM PLANE!  CODE RED.  The crew became frantic!  Everybody started scrambling and a golf cart was dispatched to go pick up Ben (he’s our Bachelor).  (I guess he was doing some morning filming alone…the kind where he paces back and forth deep in thought, talking about how he is finally ready for true love and then moaning about how every decision he makes is “the hardest decision” of his life.)

They set Ben up at the end of the runway and he looked longingly out to sea waiting for the plane…the crew was filming the whole thing.  He was wearing a very tightly fit pair of board shorts (the film crew is squatting behind him).   The plane flew in from the reef side of the island (I’d never seen that…even one of the airport workers told me that he’d never seen that before) and right over Ben’s head.   He crouched dramatically for effect (though it did come rather close). 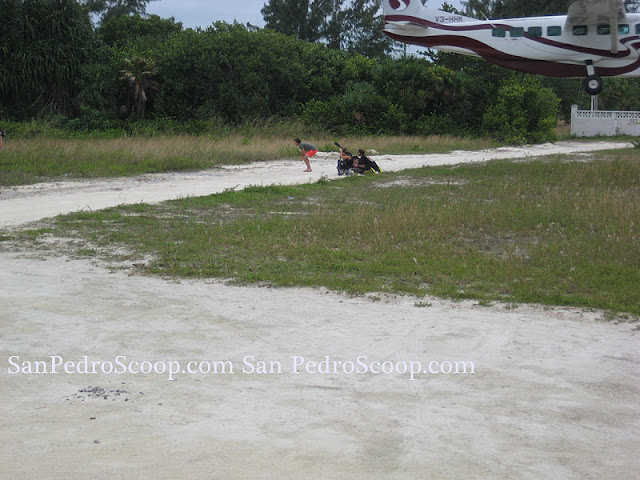 Our bachelor quickly ran around to meet his lady love. 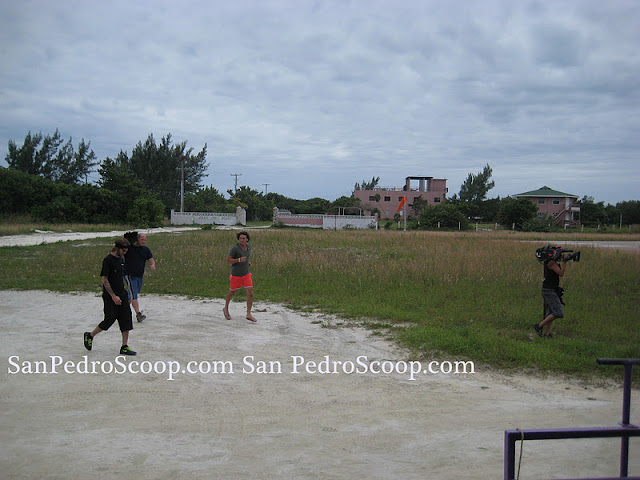 Gerald Leslie, San Pedro resident and pilot to the stars (like Jimmy Buffett and Gene Simmons), flew Ben’s flame and some more crew members on the 5 minute flight from San Pedro to Caye Caulker. 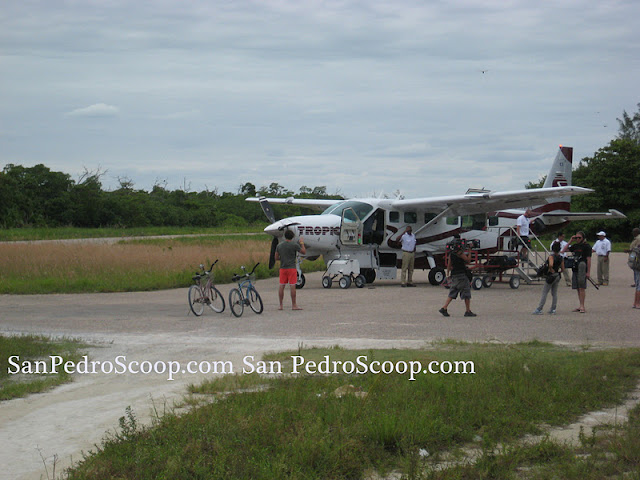 Ben’s buttercup de-planed after the luggage and crew were out of the way and ran to meet Ben.

They moved to the bikes that were carefully set up with the-cameras for their “care free bike ride around town”.  I think it took 2 takes to get this right.  Nothing on this show seems particularly care free and certainly never spontaneous.  But I don’t care.  I love it.

Ben’s bike needed adjustment…see what I mean by snug shorts?  He ended up fixing the bike himself.  Nice work, Ben. 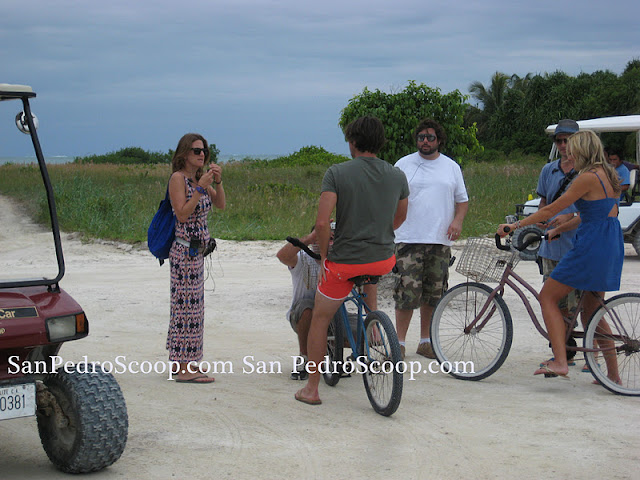 I took a golf cart taxi down to the Split.  Enough walking!  (The Split is the break in the island caused by Hurricane Hattie in 1961.  The water is deep and clear and there is a very popular bar called the Lazy Lizard).  I was a bit depressed by the lack of close ups that I got…but honestly?  I was giddy.  I love this paparazzi stuff.  SUPER FUN.  TMZ.com here I come. 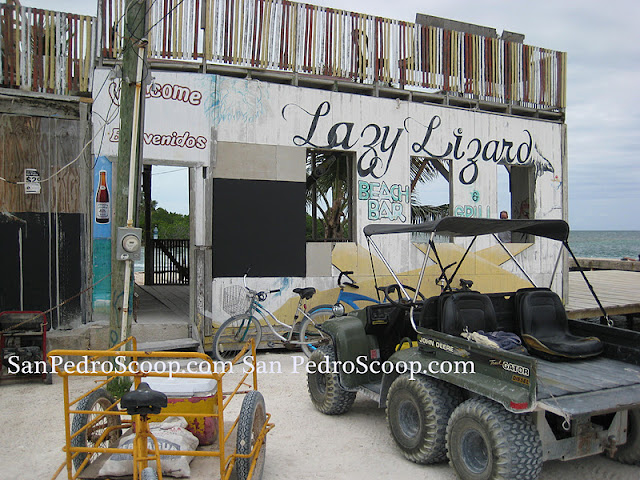 Why not have a drink of seaweed and chocolate liquor with some fellow San Pedro residents to drown my sorrows?  My paparazzi dreams.  Sure…not my first choice of beverage, but that’s what the bartender was offering. 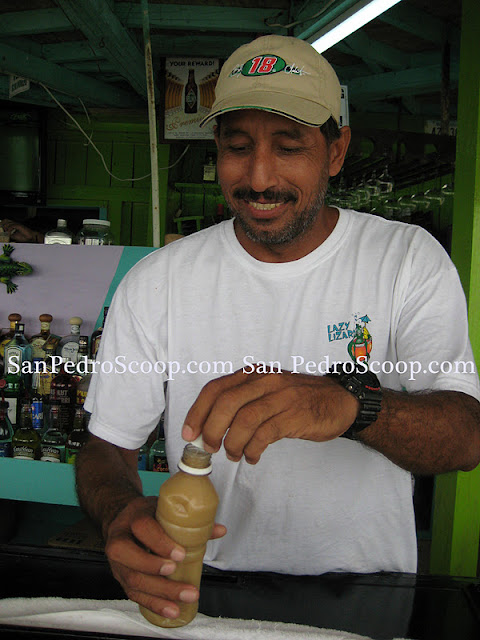 Tammy, Jim and Tony thought I was a little bit kooky…coming to Caye Caulker for this?  I do not lie to you.  I love the “Bachelor” series…this is some serious good fun. 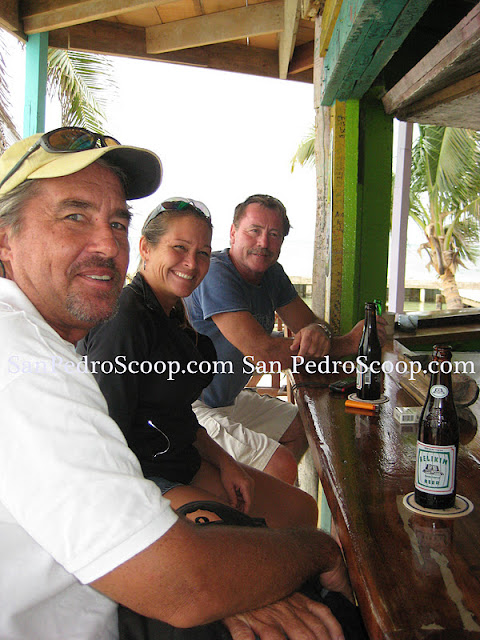 The Lazy Lizard was closing down for a BTIA and Bachelor crew party at 3pm.  In fact, the entire island was on alert.  Apparently all taxi drivers needed to be available until 3am!  This crew parties hard.  And get this…Lazy Lizard even cleaned the bathrooms!  Fresh paint and everything.   And though they didn’t bother taking away the old paint trays, it still looked pretty nice in there.  Fancy soap and everything! 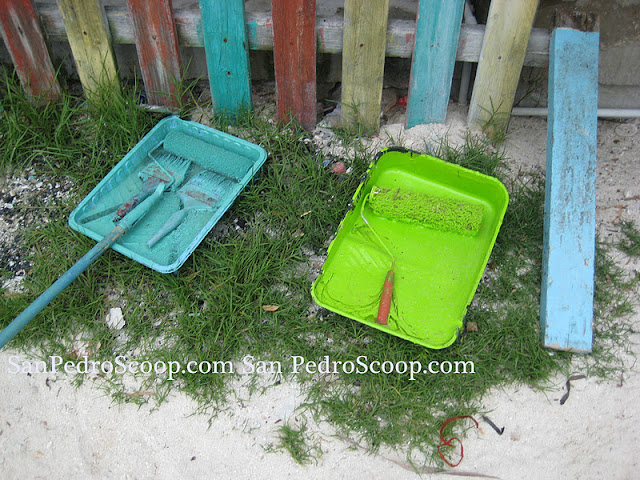 I watched guys put a lobster pot fully loaded with live, good sized lobsters into a boat….they added some rocks (to make it sink to the bottom).  A lobster prop!  The bachelor and his paramour will dive down to lobster hunt and use these stunt lobsters to make them look like top notch fishermen!  Sneaky…I hope they remember their kitchen mitts.  They’re not called spiny lobsters for nothing. 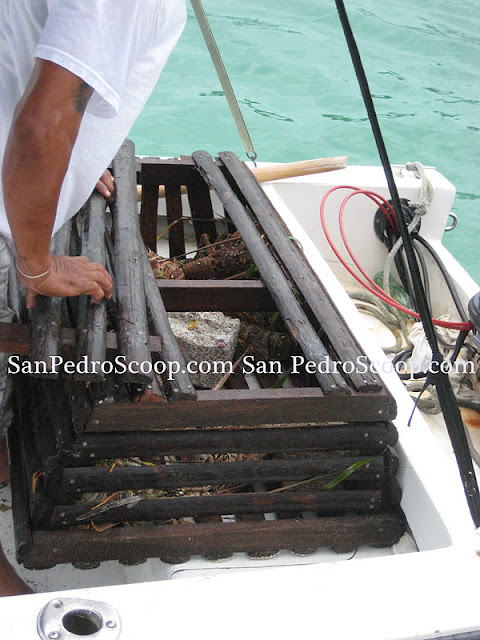 Oh well…I guess that’s it for me…time to head back to the boat for my 3.45pm taxi back to San Pedro.  I passed some pretty conch shells. 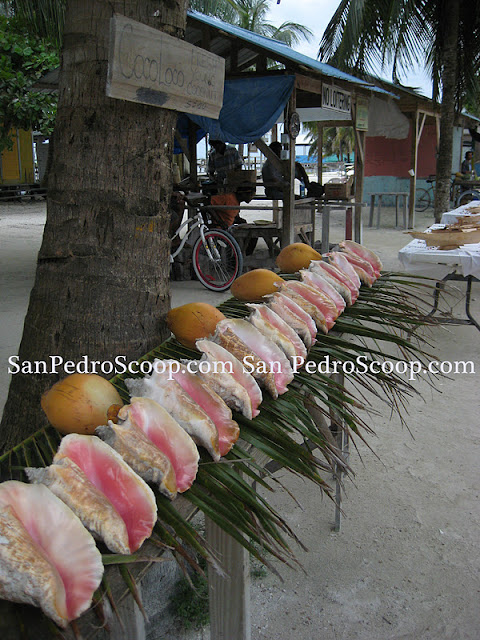 WAIT A SECOND!  Who is this?  Strolling down the street hand in hand sipping Belikins? 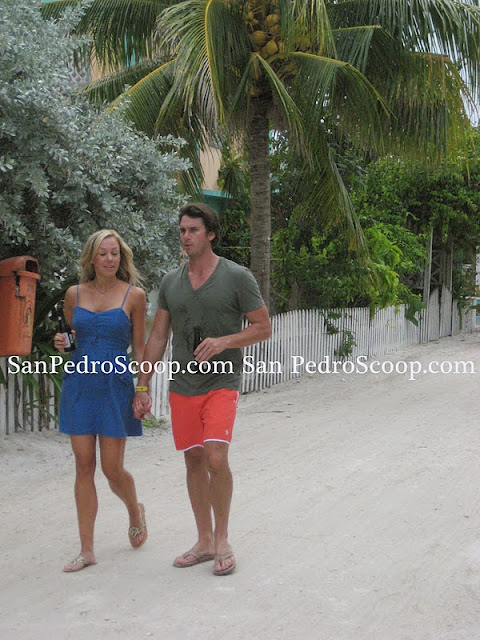 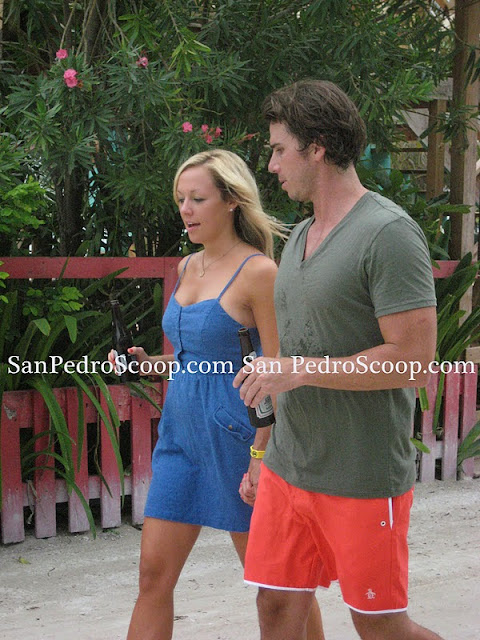 I was close enough to hear their conversation.  It was about regular vs. organic chicken.  I kid you not.  Not exactly “pillow talk”.

They ducked into a supermarket…probably another beer.  Not surprising, I can imagine you would require many MANY drinks to be a part of this crazy production.  I’d require a Jagermeister IV drip in my arm. 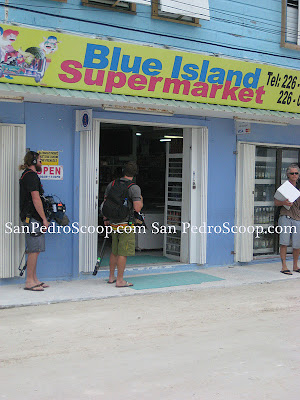 I set up for some new pictures and I was spotted by the crew (I was right across the street…not exactly hiding in the bushes).  One of the crew members got in my face.  Literally.  Told me that she would prefer that I don’t take pictures.  If I continued…she was going to be in every photo.  She wasn’t kidding around. 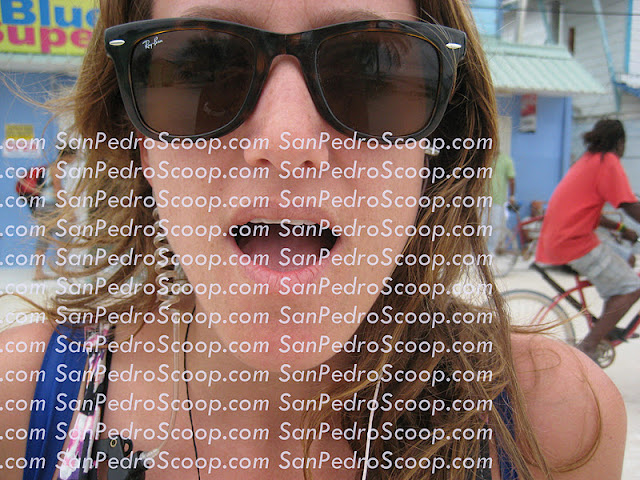 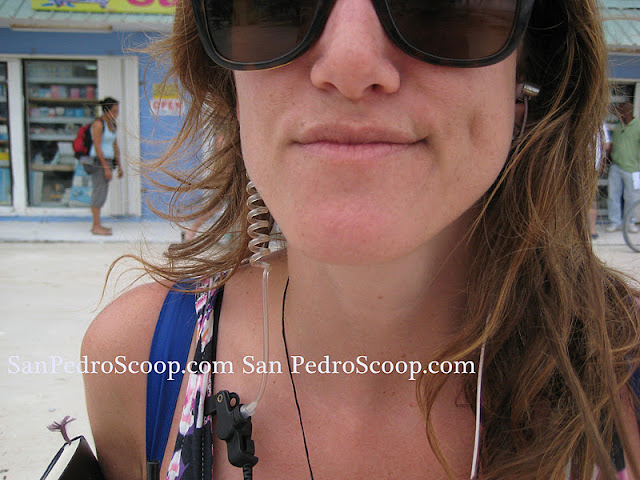 No reason to fight, I definitely was not there to start trouble.  I had a great day and it makes me really look forward to Season 16 of the “Bachelor”.  This show is not quite as spontaneous as I would have hoped but who cares?.  I adore it.  I hope they show Belize at its very best.

“The Bachelor” premieres January 2nd, 2012 on ABC.   And any bar with great TVs in San Pedro worth anything will be having viewing parties complete with girly drinks and hor d’ouvres for this whole Bachelor season.  Maybe Cosmos?

Belize will be shown constantly (they always do TONS of recaps and set-ups for future episodes).  This show has 10-20 million viewers per week (in the US alone).  What a great opportunity for all of us.  Our entire country will surely be watching…well…at least the ladies.

Lazy Lizard at the Split