HAPPY 30th BIRTHDAY BELIZE!  September 21st…what a fun day.  AND SO HOT.  It was sunny and well into the 90s.  A tough day to don a polyester uniform or a costume that involved pantyhose but hundreds did it.  Not only did it but danced their butts off too.  It was fantastic.  People kept themselves well hydrated with beers, rum punch and water and the parade…was…awesome.  Reader Beware:  I have many, many pictures. 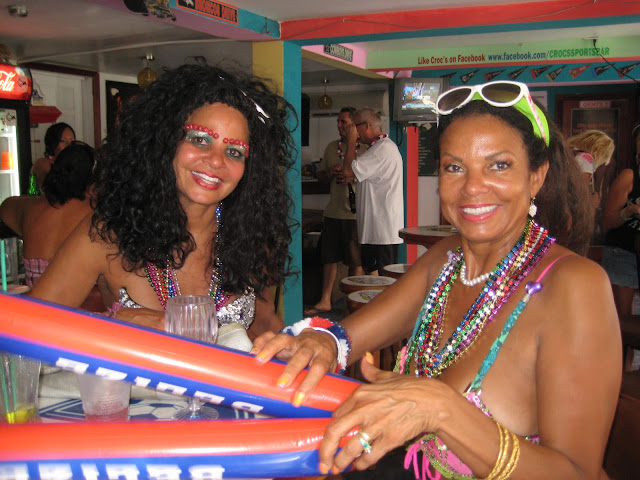 We started at Croc’s Bar which happens to have the perfect location right on front street.  And the perfect location for having a few beers while we waited for a parade that starts notoriously late.  There service is excellent.   The ladies above were there too…such good costumes and they were just watching the parade.  Croc’s had a big crowd by the time the parade began. 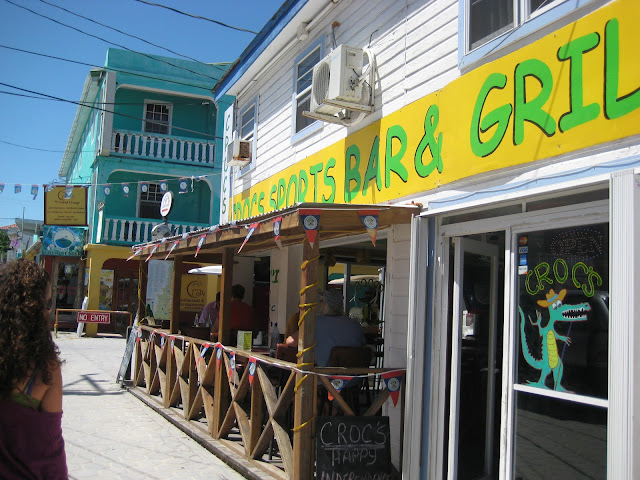 Denny, below right, is both the owner of Croc’s Bar (with his wife Lisa) and my neighbor.  Lucky people. 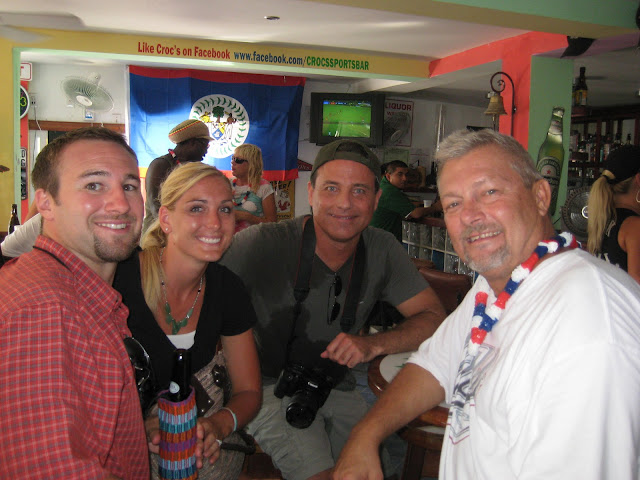 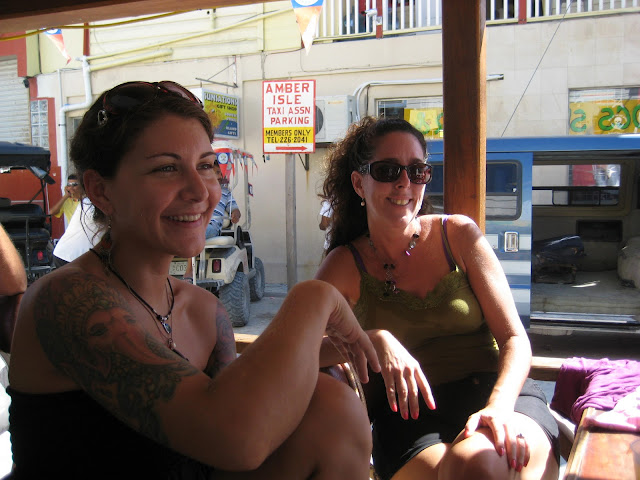 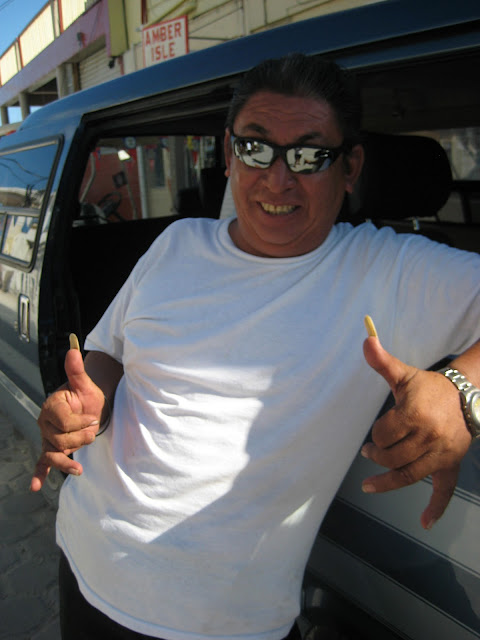 One of my taxi drivers was even excited.  Gave a thumbs up with some seriously creepy thumb nails.  I’ve seen pinkies…but not sure what the thumb is about.
We heard the fire engines and lined up outside.  These girls were giddy with anticipation. 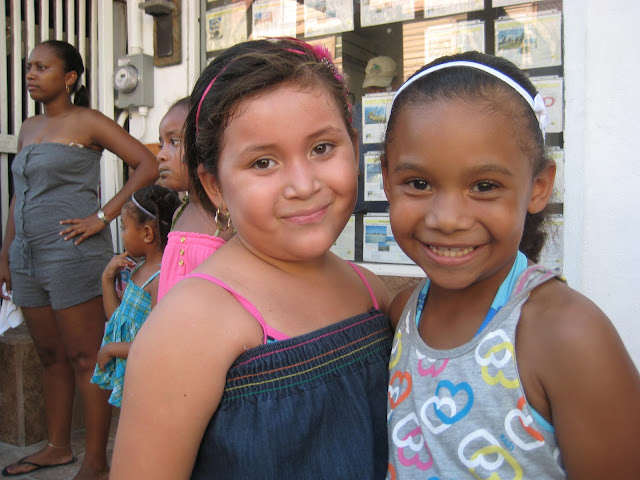 Here it comes…led by the fire department, the police and our new Miss San Pedro. 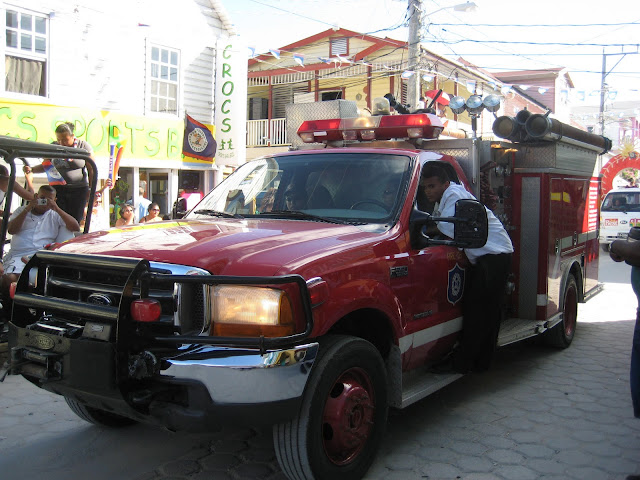 Her Royal Highness, Miss Yakarelis Hernandez waving to her subjects. 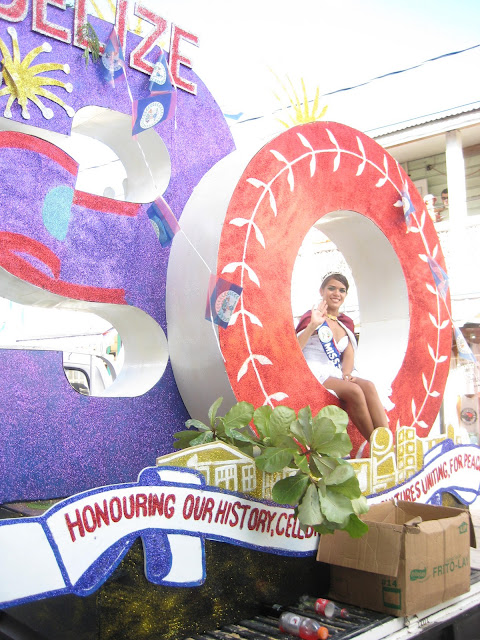 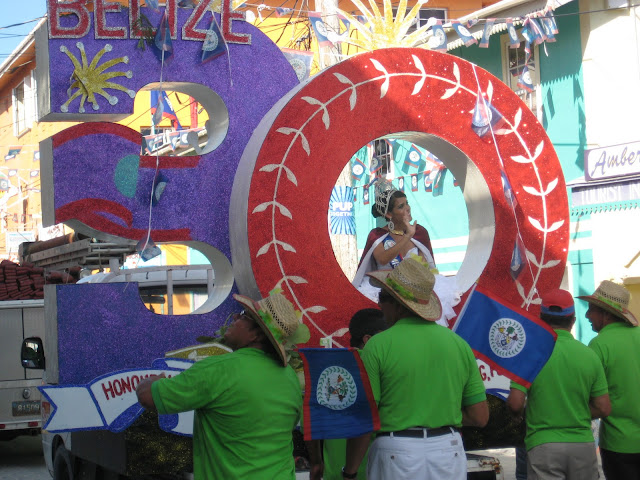 Followed by a dancing town council in green.  Each float in the parade involves BLASTING music (this year’s ubiquitous song was Lova Boy’s “Slow Tornado”  http://www.youtube.com/watch?v=w7u8hovoDuo.  If you want to feel like you are in the parade, play this as LOUD as you can while viewing these pictures.  I don’t care if you are at work, I don’t care if your husband is sleeping…blast it!) 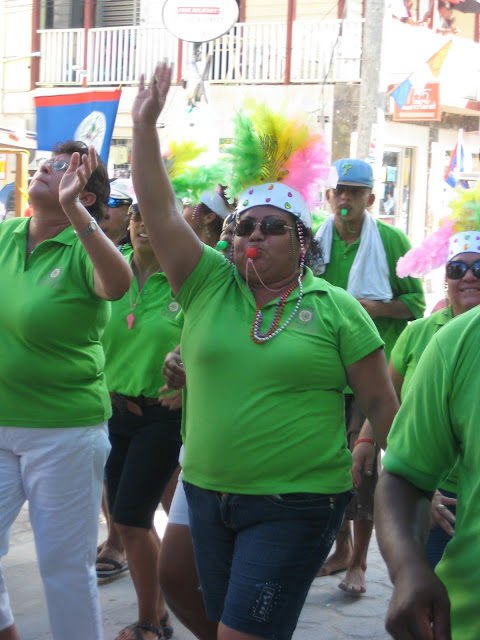 I love dancing government officials…I feel like we should force the American government to participate in this parade next year.  Might loosen them up.
Next up the High School, all four grades march separately but first…the really good drum corp and dancers. 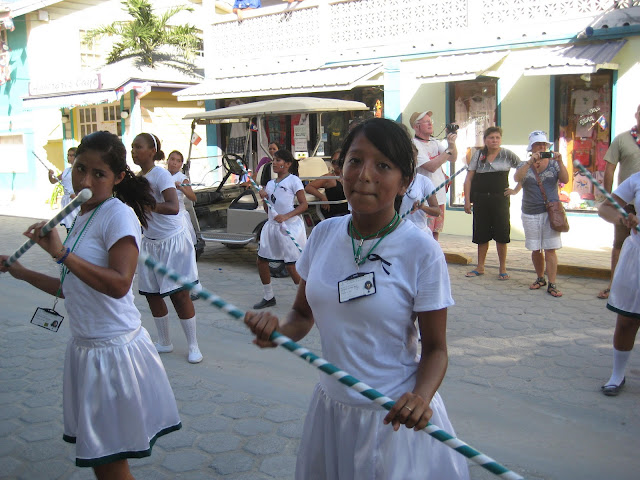 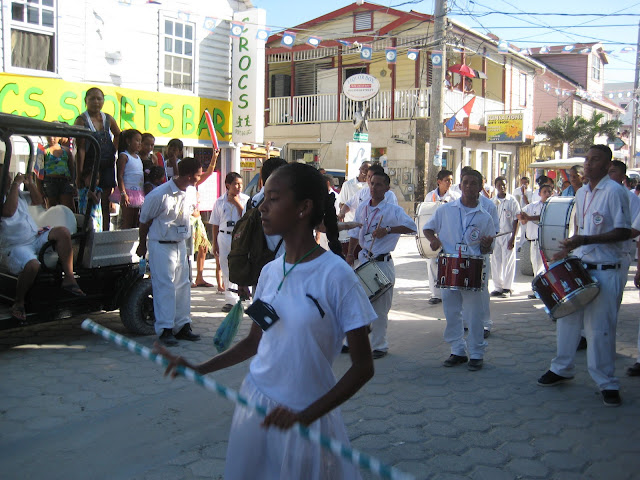 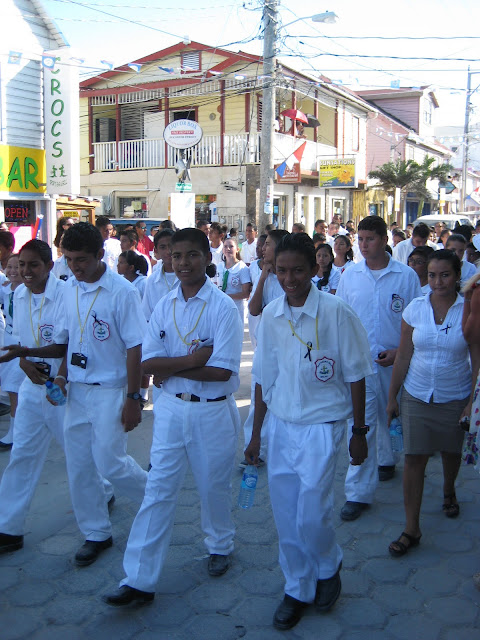 Then the Island Academy and Belikin Beer.  These guys were looking hot but everyone was still having a great time.  Some of the parents and kids were dancing and sweating… 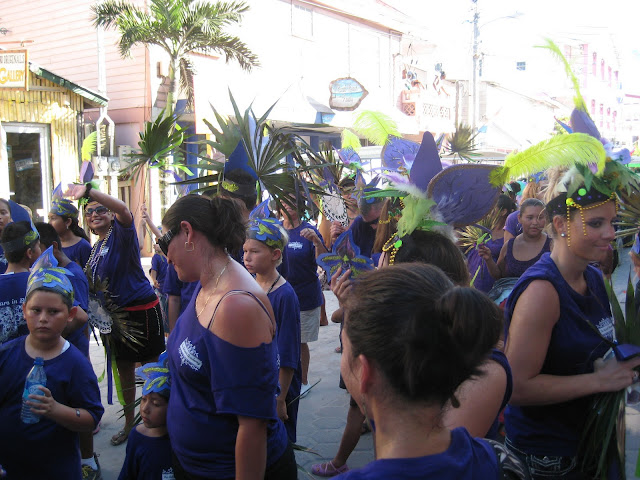 And some were following in decorated golf carts. 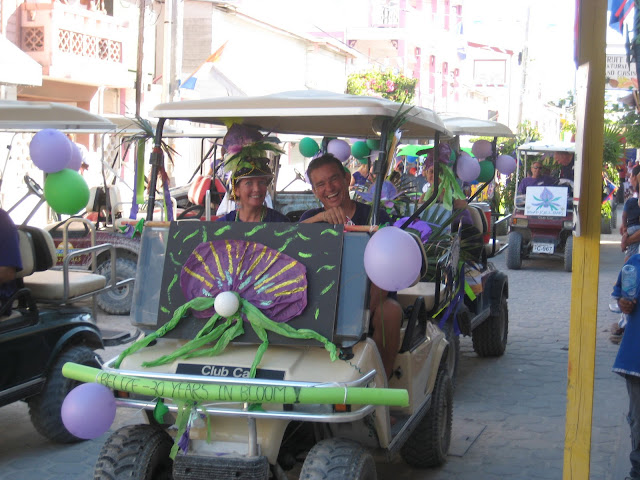 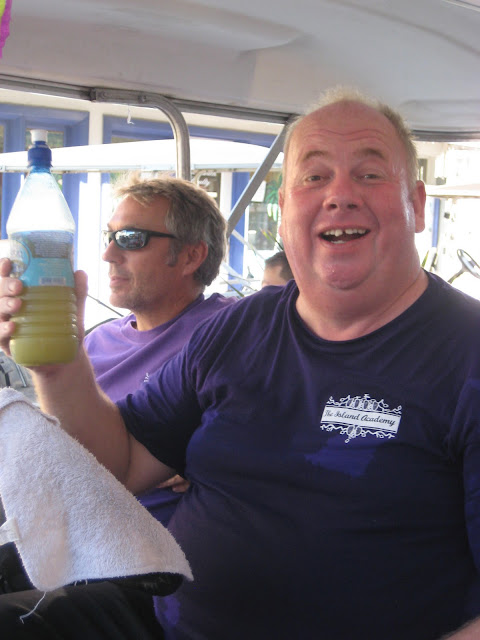 Some really went nuts decorating their carts to fit the Black Orchid theme. 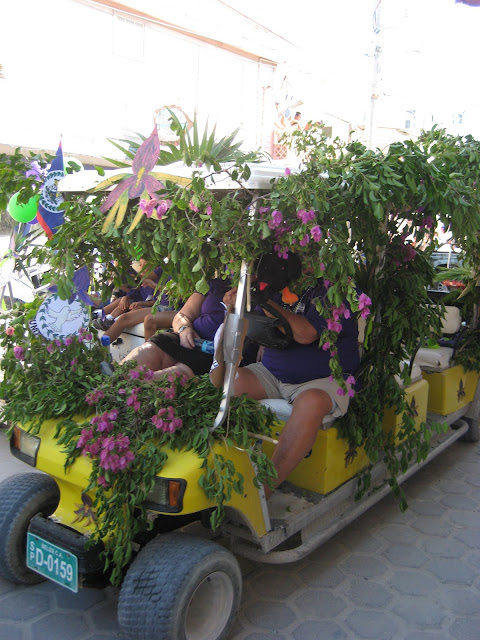 Belikin was giving out free beers (carding appropriately of course, to make sure we were over 18).  Yeah!  Dixie Bowen brought me a couple! 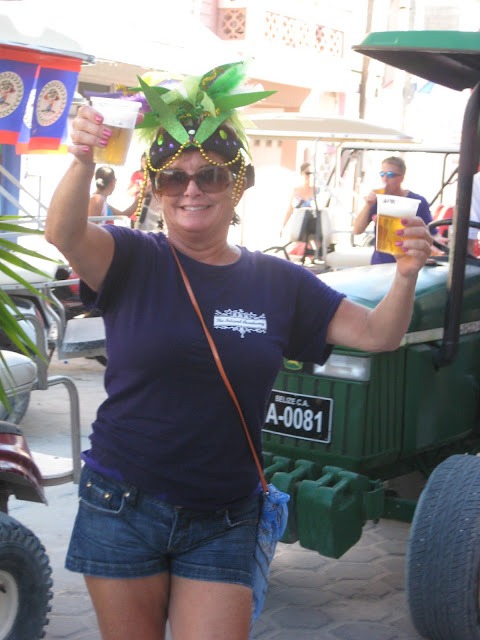 Lots of kids in cute costumes dancing like crazy. 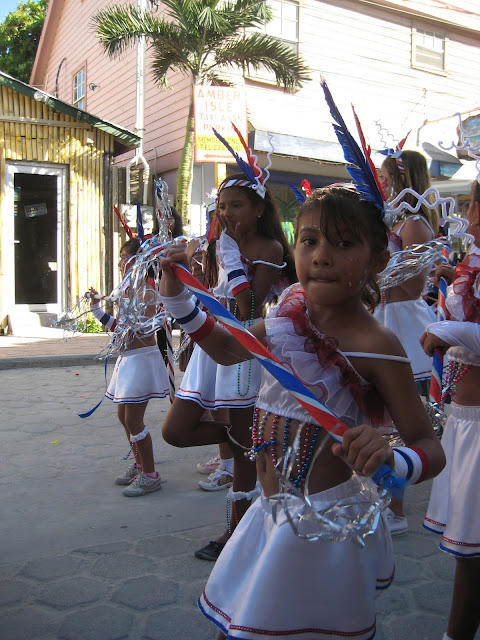 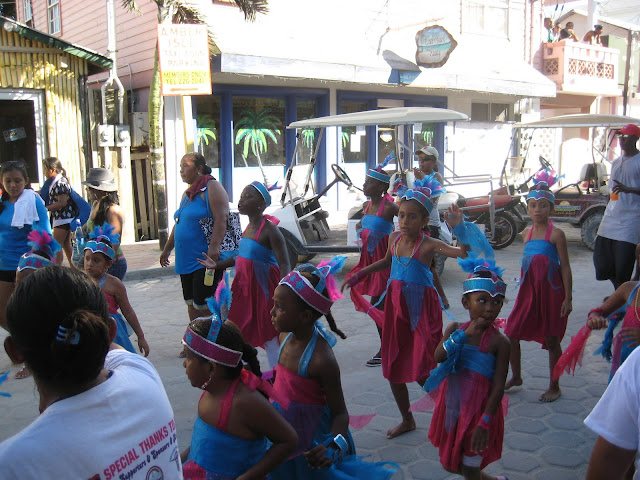 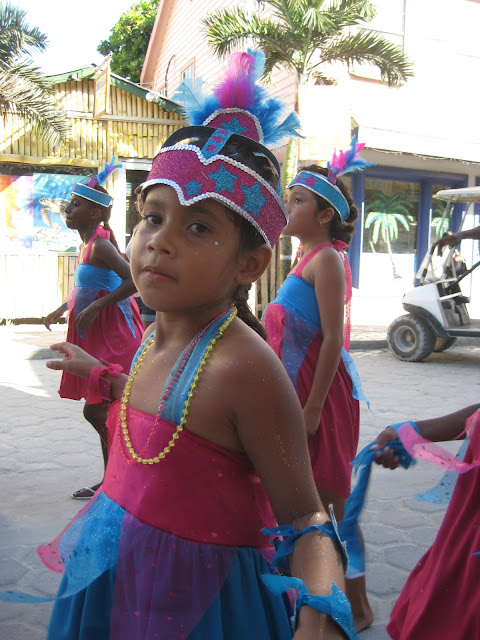 Rasta Trevor has his own little golf cart float and may have been having more fun than anyone else. 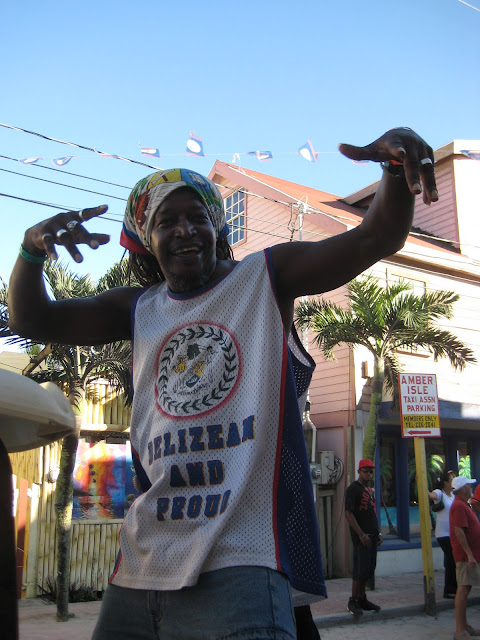 And I spotted Bob and Maureen Utsman dancing just as much as the paraders…and got this fun shot. 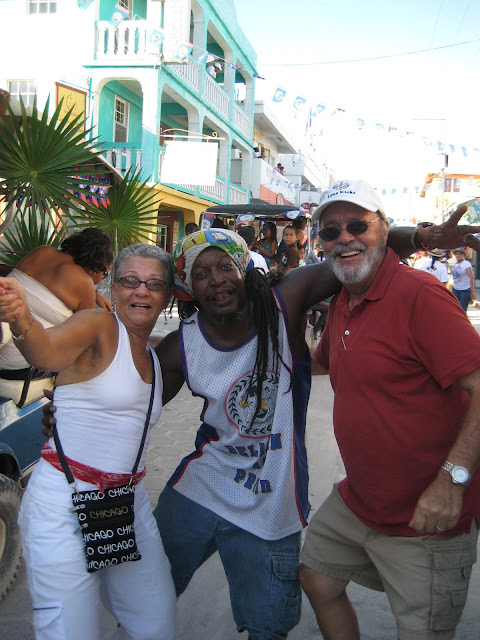 Okay guys…let’s cut this blog in two.  It is GETTING LONG and you need to get back to work.  The parade is not even close to finished and I will put the rest of blog out later today.  And don’t forget the Island Dog Hot Dog Eating Contest at Roadkill’s Karaoke Party.  Good times.

Places you just read about... find out more: